Um, I don't even know what to say about this one. It seems like a copy of Devolver's conference last year. Some of the humor didn't land on me, but I can appreciate it. Not entirely sure how I feel about secret neighbor.

So E3 is (sorta) here, (The expo hasn't even started yet) and EA is the first to go as in previous years, holding their annual EAPlay conference.

I'll be honest, I went in to it with very low expectations. The only thing I really wanted was Skate 4. But yet, despite the fact that I came in with virtually no expectations, I was still disappointed. It's honestly one of the worst conferences EA has had in a while.

For starters, the conference didn't have much at all. Very little in the conference deserved a press conference and could of been revealed on Twitter. We got some updates on Battlefield 5 (with battle royale mode because that's the current money making trend in the industry right now), then there was the usual sports games for the year, with updates to FIFA and a new NBA game. We also got a look at EA's new cloud-based service, Origin Access Premiere. Then, we got a look at the new command and conquer mobile game with a "match" being narrated as if it's an esport (why?? Why make it a generic mobile strategy game??) There was also some looks at indies, such as the announcement (and immediate release of) Unravel 2, and the announcement of A Way Out. Finally, the conference ended with a detailed look at Anthem.

Frankly, the only thing that interested me was Unravel 2. Everything else was meh, and I'm still really cautious about Anthem. So with that being said, why did they even hold a press conference this year? What was the point?

Oh, and no mention of Skate, despite the enormous demand for it.

Overall, I don't think I like this one. Although the only thing that was somewhat offensive was the mobile Command And Conquer title, there was also nothing really exciting. Everything was either stuff that we expected or stuff that we already knew about, with really only 1 or 2 things that came out of nowhere. 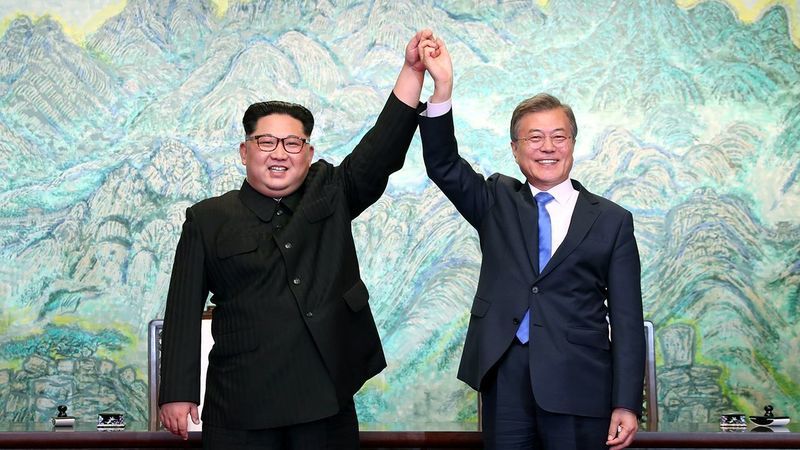 This is a photo of South Korean president Moon Jae-in and North Korean president Kim Jong-Un raising their hands together. But this isn't your average meeting between world leaders. This is a meeting between two leaders of two countries that were formerly one, divided by war, anger, and threats for over half a century. Yet, here they are. Holding their hands in the air together, acting almost like old friends. This photo represents peace. It represents a new Korea bound together by unity, instead of war. A Korea of cooperation. Suddenly, after years of Kim Jong-Un and North Korea testing nuclear weapons and missiles, threating annihilation against Japan, The United States, and it's neighbor South Korea, we have this photo, of said leader raising his hand in the air alongside the president of a country he previously threatened to invade.

This feels surreal to me. I remember just a few months ago reading reports of new North Korean missile and nuclear tests, with this conflict appearing to escalate. Now, we have the two koreas announcing that they are going to sign a formal peace treaty ending a war that never truely ended (the two Koreas signed a Armistice, but not a peace treaty) This has all happened in a matter of months. It feels so fast.

I wish the best of luck to both Koreas in their quest for peace, and to the Korean people. Maybe one day we'll see a unified Korea again.

Disclaimer: The photo in question was originally posted to the Korea.net Flickr account here. It is currently licensed under the Creative Commons Attribution Non-Commercial Share-Alike 2.0 license.

According to this article by 9to5Google, Google is preparing to launch a new streaming service called "YouTube Remix" that will replace Google Play Music.

Additionally, the article notes that in an APK teardown of the YouTube app, 9to5Google found references to a "YouTube Plus" subscription tier. To me, this suggests that either YouTube Red and Google Play Music are going to be combined into the "YouTube Plus" service, or it will be an entirely separate tier.

I'm hoping that Google doesn't go through with this. Google Play Music already works fine for plenty of people, and we don't need another app that already does the same thing that we were able to do previously. Google already has a problem with this (See: Every single Google chat platform)

According to an article by The Register, it looks like the EU has a problem with the current WHOIS system, with the EU claiming that the current WHOIS system isn't compliant with the upcoming GDPR. As a result, ICANN now has to come up with a replacement for WHOIS, or make changes to it in order to be compliant. The article does note, however, that "the Whois service may still publish some personal details once everything has been worked through, so long as there is a clear justification for it." So it looks like there will be changes coming to the WHOIS system in the future.

Honestly, this is great. I really dislike the current WHOIS system, as it makes tons of personal information about the owner of the domain name easily publically available, unless you're either with a registar that offers WHOIS "protection" (basically it replaces a lot of the WHOIS details with it's own, masking your personal info) for free or one that offers it as a paid service (that you're subscribed to). I don't think the need for this much info to be made public is really justifiable, so I'm glad changes are being made. We'll have to see what those changes are, however.

Also, I'd like to note that the GDPR going to effect is almost here, with it going into effect on the 25th of May of this year. So far we're seeing a lot of interesting privacy changes by Google and Facebook to be in compliance with it, which is good, as it's time that privacy be taken seriously. I'm hoping that eventually something like this comes to the US, however I won't hold my breath knowing how congress isn't exactly good at understanding technology.

Who knows what the future holds for technology and privacy. I guess we'll have to wait and see.